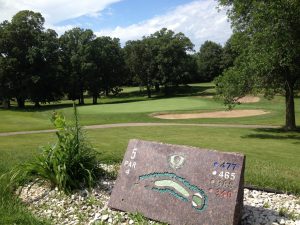 From 1919 to 1965, William G. and Emma Tessman, Sr. farmed the land on which Dahlgreen Golf Club is built. Of their five children, only Blanche, married to Paul Stans, and Bill, were living in the area when the family was considering what to do with the farm. When Emma suggested a golf course, the “seed” was planted in the minds of Bill, Blanche and Paul.

Since the land was located in Dahlgren Township, Paul suggested adding an “e” and the dream was given a name: Dahlgreen Golf Club.

Dahlgreen’s front nine, formerly a farm pasture for dairy cows, opened for limited play in 1968. The “pro shop” was a wooden box nailed to a tree where patrons dropped in their green fees. The original clubhouse was built in 1969. Bill seeded the back nine in the fall of 1971 and in 1972, Dahlgreen Golf Club became an 18-hole course.

Many changes and improvements have taken place over the years. Holes 17 and 18 were part of the original front 9. When the back 9 opened, holes 5 and 6 were altered to allow the entire front 9 to be played east of the clubhouse. Over the years water and bunkers were added, hills cut down, tees boxes expanded, and many trees planted, all in an effort to make Dahlgreen more challenging, fair and serve as a “true test of golf.”

Leagues and tournaments have always been an integral part of Dahlgreen. The men’s, women’s and couple’s leagues were formed in 1969. Many club-sponsored tournaments throughout the season offer opportunities to compete and have fun.

It’s hard to imagine the days of a patron box nailed to a tree, given Bill’s, Paul’s and Blanche’s long-term goal of making Dahlgreen one of the finest golf courses in Minnesota. Thanks to the continued support of you, the golfer, Dahlgreen has continued to grow and improve. We thank you for being a part of our history and making the dream of Dahlgreen Golf Club a reality.